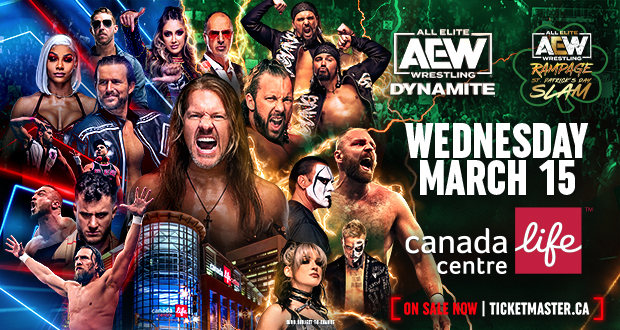 BUY TICKETS
March 15, 2023
6:00 pm
Due to a revised network TV broadcast schedule, the double-header “AEW: Dynamite” and “AEW: Rampage” shows originally scheduled for March 14 at Canada Life Centre in Winnipeg, Man. have been rescheduled for Wednesday, March 15.
Fans who have already purchased tickets will have their original tickets valid for admission to the event on March 15. Fans who cannot attend on the rescheduled date or who wish to seek a refund have until Sunday, Feb. 5 to request a refund from Ticketmaster or the original point of purchase. After Feb. 5, all sales are final. AEW and Canada Life Centre appreciate your support.

After making its international debut with two raucous shows from the Coca-Cola Coliseum in Toronto, Ontario in October, AEW announced it will expand its Canadian footprint to Winnipeg, Manitoba with a special edition of “AEW: Dynamite” and “AEW: Rampage” taking place live from the Canada Life Centre on March 15. Tickets start at $35, plus fees.

Winnipeg is birthplace and hometown of many of AEW’s top stars, including the legendary Chris Jericho, Kenny Omega and Don Callis.

Founded by CEO, GM and Head of Creative Tony Khan in 2019, AEW is offering an alternative to mainstream wrestling, with a roster of world-class talent that is injecting new spirit, freshness and energy into the industry.  “AEW: Dynamite” airs every Wednesday from 8-10 p.m. ET on TBS and attracts the youngest wrestling audience on television.  The fight-forward show “AEW: Rampage” airs every Friday from 10-11 p.m. ET on TNT.  AEW’s multi-platform content also includes “AEW Dark” and “AEW Dark: Elevation,” two weekly professional wrestling YouTube series, “Being the Elite,” a weekly behind-the-scenes YouTube series, and “AEW Unrestricted,” a weekly podcast series.  For more info, check out Twitter.com/AEW; Instagram.com/AEW; YouTube.com/AEW; Facebook.com/AEW