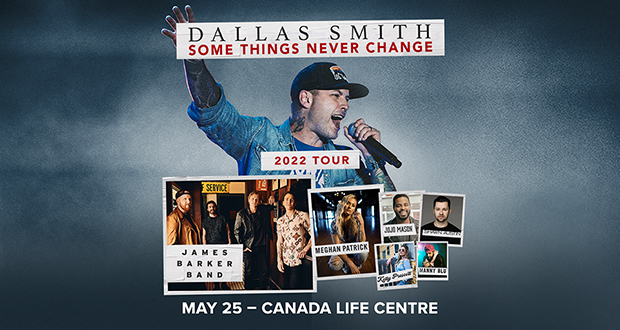 Platinum selling Country star DALLAS SMITH “has blazed a path across genres in Canadian music” (CBCMusic) for nearly two decades and fans continue to prove they’ll follow him wherever he wants to go. On the heels of a career album (Lifted) earning critical acclaim, commercial success including a multi-week #1 single and an armful of JUNO and CCMA Award wins and nominations, Smith continues one of the most talked about journeys in Canadian country music with the latest marker, his fourth #1 single “SKY STAYS THIS BLUE” from the 2017 JUNO Award nominated and CCMA Awards Album of the Year release “SIDE EFFECTS” (604 Records) released last September (2016).

Presented by Old Camp Whiskey, Smith kicks off the national Side Effects Tour in Halifax on October 12th and will make 26+ stops in cities across the country before wrapping in Abbotsford on November 18th The national tour will see special guests Lauren Alaina, James Barker Band, Cold Creek County, Michael Ray and The Cadillac Three join Smith for select dates.