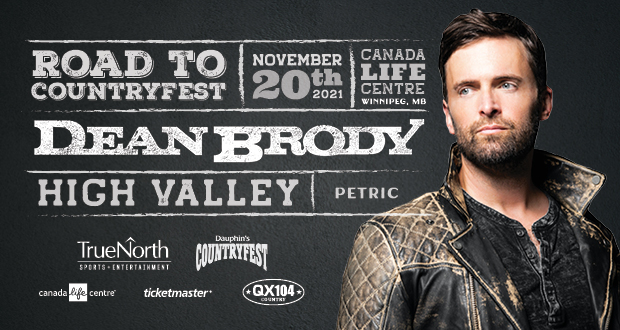 With Dean Brody excited to headline the return of Dauphin’s Countryfest next summer, the concert at Canada Life Centre will give fans a taste of what’s to come at the 2022 festival.

Dean Brody has become one of the most beloved Canadian country artists of his generation since his debut single “Brothers” hit the US Top-40 back in 2008. He has risen and remains at the top of the Canadian country landscape with an impressive 30 Top-10 singles (including six #1s), 17 CCMA Awards, two JUNOs, more than 235 million global streams, and numerous gold and platinum certified singles.

High Valley has received praise from Rolling Stone, Pandora, and more for their soaring harmonies and memorable songs. The group has earned more than 400 million streams in the US and Canada, six Canadian Platinum certified singles, three #1s at Canadian Country Radio, two Canadian Gold certified albums, and back-to-back Gold certified singles in the US, making them the highest selling Canadian band in country music history.

Petric has made quite the statement since forming back in 2014, with over 14 million online streams, 600,000 video views, eight charting singles, three Top 20s, and multiple awards to their name. The Canadian trio, comprised of brothers Tom and Jason Petric, and long-time friend Jordan Day, released their first full-length album Flashbacks on Jan. 13, 2021.

Entry may be subject to any COVID-19-related rules and restrictions in place at the time of the event, including but not limited to, proof of fully vaccinated status being required for entry.