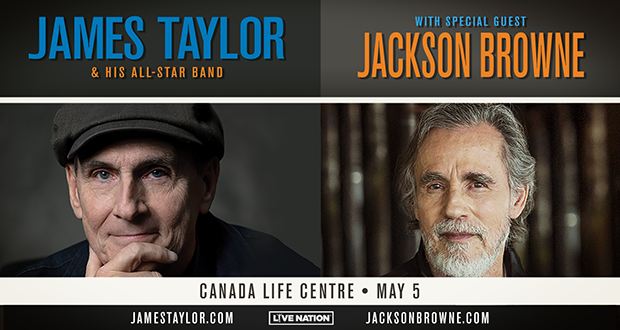 BUY TICKETS
May 5, 2022
Due to a small number of positive COVID-19 cases within the tour, James Taylor & His All-Star Band with special guest Jackson Browne, regretfully announce the postponement of their Winnipeg concert this Thursday, May 5 at Canada Life Centre. This decision was made out of an abundance of caution for the touring personnel, general public and the audience in Winnipeg.

The show will be rescheduled at a later date and more information will be released as it is available.

James Taylor says “This further delay of our Winnipeg concert was a hard decision for us to make. Our Canadian audience has already been so patient; some people have held onto their tickets for a long time. But if you will hold on a bit longer, we’ll try and make it worth the wait…”

Refunds will be available to those who do not wish to hold onto their tickets. Fans with questions regarding refunds are asked to reach out to their point of purchase. Previously purchased tickets will be honored on the new date.

About James Taylor
As a recording and touring artist, James Taylor has touched people with his warm baritone voice and distinctive style of guitar-playing for more than 40 years, while setting a precedent to which countless young musicians have aspired. Over the course of his celebrated songwriting and performing career, Taylor has sold more than 100 million albums, earning gold, platinum, and multi-platinum awards for classics ranging from Sweet Baby James in 1970 to October Road in 2002. In addition to multiple Grammy awards, Taylor has been inducted into both the Rock and Roll Hall of Fame and the prestigious Songwriters Hall of Fame.

About Jackson Browne
Hailed as one the Greatest Songwriters of All Time by Rolling Stone, Jackson Browne has written and performed some of the most literate and moving songs in popular music. A defining Americana artist, who’s songwriting is often charged with honesty, emotion and personal politics, Browne is known for his hits, like “Running On Empty,” “The Pretender,” “Doctor My Eyes,” and “Take It Easy,” as well as deeply personal ballads such as “These Days” and “In the Shape of a Heart.” He was inducted into the Rock & Roll Hall of Fame in 2004 and the Songwriters Hall of Fame in 2007.