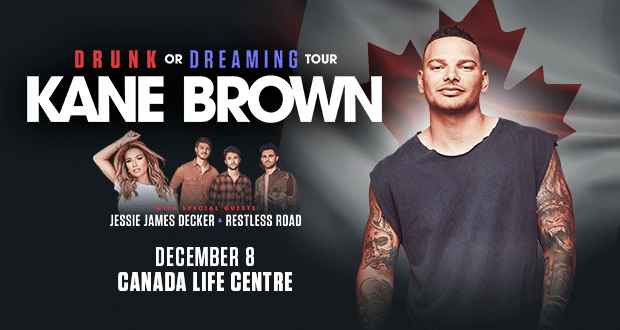 Named “the future of country music” (Billboard), Brown first broke onto the scene with the arrival of his self-titled, 2X Platinum debut album (2016), where he became the first artist ever to lead all five of Billboard’s main country charts simultaneously. His debut effort, Kane Brown, topped the Billboard Top Country Albums chart for 13 weeks and garnered 7X Platinum-certified hits “Heaven” and “What Ifs”-the fourth and seventh most-streamed country songs of all time.

With the release of his follow up album Experiment (2018), Brown became the only male country artist in more than 24 years to have his sophomore album debut at the top the Billboard 200. The Platinum certified album yielded three consecutive No. 1 Multi-Platinum certified hits “Lose It,” “Good As You” and “Homesick.”

Brown’s most recent collaboration, “Famous Friends” with Chris Young, became Billboard’s 2021 year-end No. 1 Country Airplay Song and earned a CMT Award for “Collaborative Video of the Year.” Recently named as one of Time’s 100 most influential people in the world, Kane Brown has ascended from social media notability to become one of country music’s most accomplished mainstays with seven chart-topping No. 1 singles to his name, including his latest hit, “One Mississippi.” Written by Brown, Matt McGinn, Taylor Phillips, and Jordan Schmidt Brown’s new single “Like I Love Country Music” is available Friday (5/6) and, along with “One Mississippi” is part of Brown’s upcoming new album expected later this year.