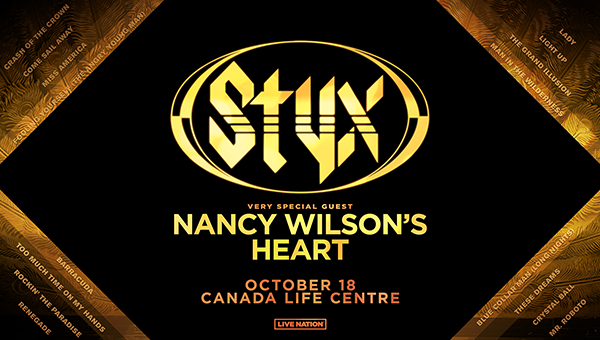 BUY TICKETS
October 18, 2022
7:00 pm
STYX, the multimegamillion-selling rock band that has forged an indelible legacy both on record and onstage, return to Canada in 2022 for a cross-country live tour alongside very special guests NANCY WILSON’S HEART.

About Nancy Wilson:
Nancy Wilson is celebrated as a seminal musician in rock ‘n’ roll history. A guitar virtuoso from the age of 9, Nancy (and her sister Ann) lead the multi-platinum rock group, Heart, who have sold upwards of 35 million albums. Nancy is revered as an ingenious guitar player, and as a gifted lead vocalist. In fact, that’s Nancy singing on Heart’s first Number One hit, “These Dreams.” As a songwriter, Nancy has co-written a collection of indelible songs that have earned their way into the classic rock canon (“Magic Man,” “Crazy on You,” “Barracuda,” “Straight On”). During an era when females where scarce in rock ‘n’ roll, Nancy helped carve out a place for women to front rock bands and dominate on stage. Her icon status was cemented when Heart was inducted into the Rock ‘N’ Roll Hall Of Fame in 2012.