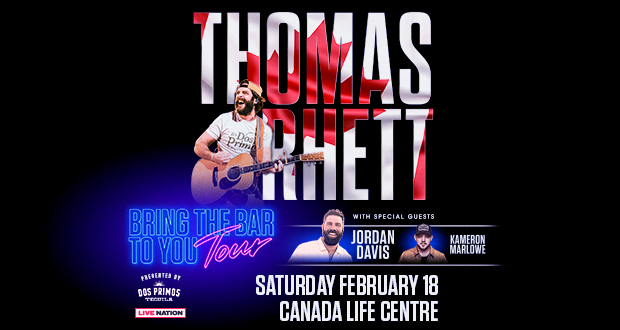 BUY TICKETS
February 18, 2023
7:30 pm
In the midst of this summer’s packed BRING THE BAR TO YOU TOUR, Thomas Rhett announces the tour will now include a Canadian extension in 2023. Featuring Jordan Davis and Kameron Marlowe as openers, tickets for the new dates in Canada will be available for purchase beginning Friday, August 26 at 10am local at www.ticketmaster.ca.

Ten years after signing his record deal with Big Machine Label Group’s The Valory Music Co., arena-packing superstar Thomas Rhett — dubbed “the most reliable maker of No. 1 singles in country music” (Variety) — has 19 multi-PLATINUM and GOLD-certified No. 1 hits, 12 BILLION streams and the longest current active streak of consecutive No. 1s in the format (Mediabase/Country Aircheck Chart).

Jordan Davis is climbing the charts with his current single “What My World Spins Around.” He recently scored his fourth No. 1 with the Double Platinum hit “Buy Dirt” (feat. Luke Bryan). Davis previously notched three consecutive No. 1 hits: “Slow Dance In A Parking Lot,” “Singles You Up” and  “Take It From Me,” each featured on his Gold-Certified debut album, Home State.

Marlowe has been hailed as “a for-sure singer, full of expressive, throaty dips, raspy touches, soaring notes and hidden power” (MusicRow) and named an “Artist to Watch” by Amazon Music, Spotify and Pandora, and toured with Brad Paisley, Luke Combs, Morgan Wallen, Riley Green, and more. “Steady Heart,” Marlowe’s fastest-growing track to date, reached No. 6 on SiriusXM The Highway’s Top 30 Countdown, where his current single, “Giving You Up,” hit No. 1.