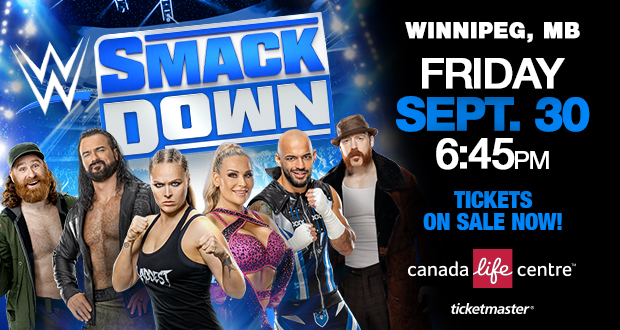 The WWE Friday Night SmackDown live event scheduled for January 21, 2022 at Canada Life Centre in Winnipeg has been rescheduled to Friday, September 30.

Tickets are currently on sale through Ticketmaster.ca and all originally purchased tickets will be honored for the rescheduled date.

After 17 years, WWE Friday Night Smackdown will be returning to Winnipeg for a live broadcast at Canada Life Centre on September 30.

Tickets start at $20, plus fees. Ringsider experiences are available!

“After more than 17 years since it was held at the Winnipeg Arena, Smackdown is coming back,” said Kevin Donnelly, Senior Vice President, Venues + Entertainment at True North Sports + Entertainment. “WWE’s return to Manitoba with its live television broadcast of Friday Night Smackdown is evidence that Manitoba wrestling fans are among the best in the world. This event is sure to attract people from all over to take in this monumental wrestling production, and we couldn’t be more excited. As it turns out, WWE’s RAW was the very last non-hockey event at our downtown arena prior to the COVID-19 lockdown in March 2020, and it was an incredible success. We are grateful for the confidence WWE has shown in Winnipeg and Manitoba wrestling fans and look forward to being back on wrestling’s world stage.”

Plus, from Monday Night RAW Riddle vs Kevin Owens!