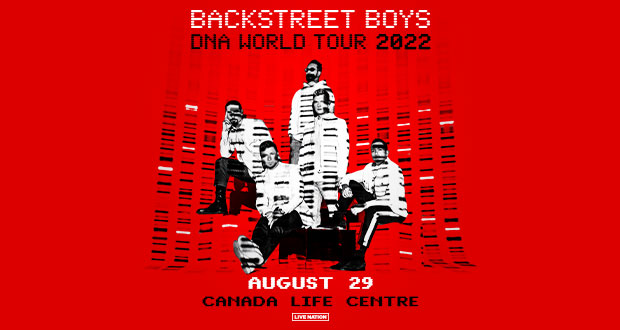 BUY TICKETS
August 29, 2022
7:30 pm
The Backstreet Boys, one of the best-selling bands of all time, announced additional tour stops on their DNA World Tour including Canada Life Centre.

For 29 years the Backstreet Boys have delivered the finest pop music one has to offer, making them one of pop’s most influential performers. With countless #1s, record-setting tours, numerous awards and worldwide sales in excess of 130 million, BSB has been recognized as the best-selling boy band in history.

In early 2019, BSB released their GRAMMY nominated 10th studio album “DNA” on RCA Records. The album debuted at #1 and features the Top 10 hit “Don’t Go Breaking My Heart.” The critically acclaimed and chart topping single was nominated for the “Pop Duo / Group Performance” 2019 GRAMMY, and was BSB’s first hit on the Billboard Hot 100 in 10 years. Upon its release, the single went straight to #1 on iTunes Top Songs and Global charts and charted in over 22 countries.